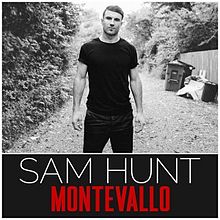 Montevallo is the debut studio album by American country music artist Sam Hunt. It was released on October 27, 2014, via MCA Nashville. Hunt co-wrote all ten tracks on the album. The album was produced by Zach Crowell and Shane McAnally. “Cop Car” was previously recorded by Keith Urban on his eighth studio album Fuse, who released it as a single in January 2014.